A prosecutor told jurors on Monday in Los Angeles that the stories of the women who will testify that Harvey Weinstein sexually assaulted them tell uncannily similar stories of themselves as young aspiring women who were cornered in hotel rooms by a man who at the time was the definition of Hollywood power.

“Each of these women came forward independent of each other, and none of them knew one another,” Deputy District Attorney Paul Thompson said during his opening statement at Weinstein’s Los Angeles trial.

Weinstein, Thompson said, lorded his power over them, talking about the female A-list actors whose careers he had made before growing aggressive. Thompson played a video presentation that showed composite photos of the women, with quotes from prior testimonials displayed. Most were aspiring actors. One was an aspiring screenwriter who thought she was going to pitch a script to “the most powerful man in Hollywood” at the time, Thompson said, referring to Weinstein. One was a masseuse with a famous clientele of actors and athletes, who Weinstein suggested might write a book for his company’s publishing arm before later cornering her in the bathroom.

All will testify that Weinstein ignored clear signs the women didn’t consent, the prosecutor said, including “their shaking bodies, their crying, their backing away from him, their saying ‘no.'” He said he assaulted one woman after she showed him pictures of her children in an attempt to get him to stop.

Weinstein has denied any non-consensual sex and has pleaded not guilty to the charges. He was brought into court Monday by deputies in a wheelchair, wearing a black suit and blue tie. Before jurors entered, he climbed into a chair at the defense table with his lawyers, and watched the prosecution’s presentation from there.

His lawyer is set to give its opening statement on Monday afternoon. 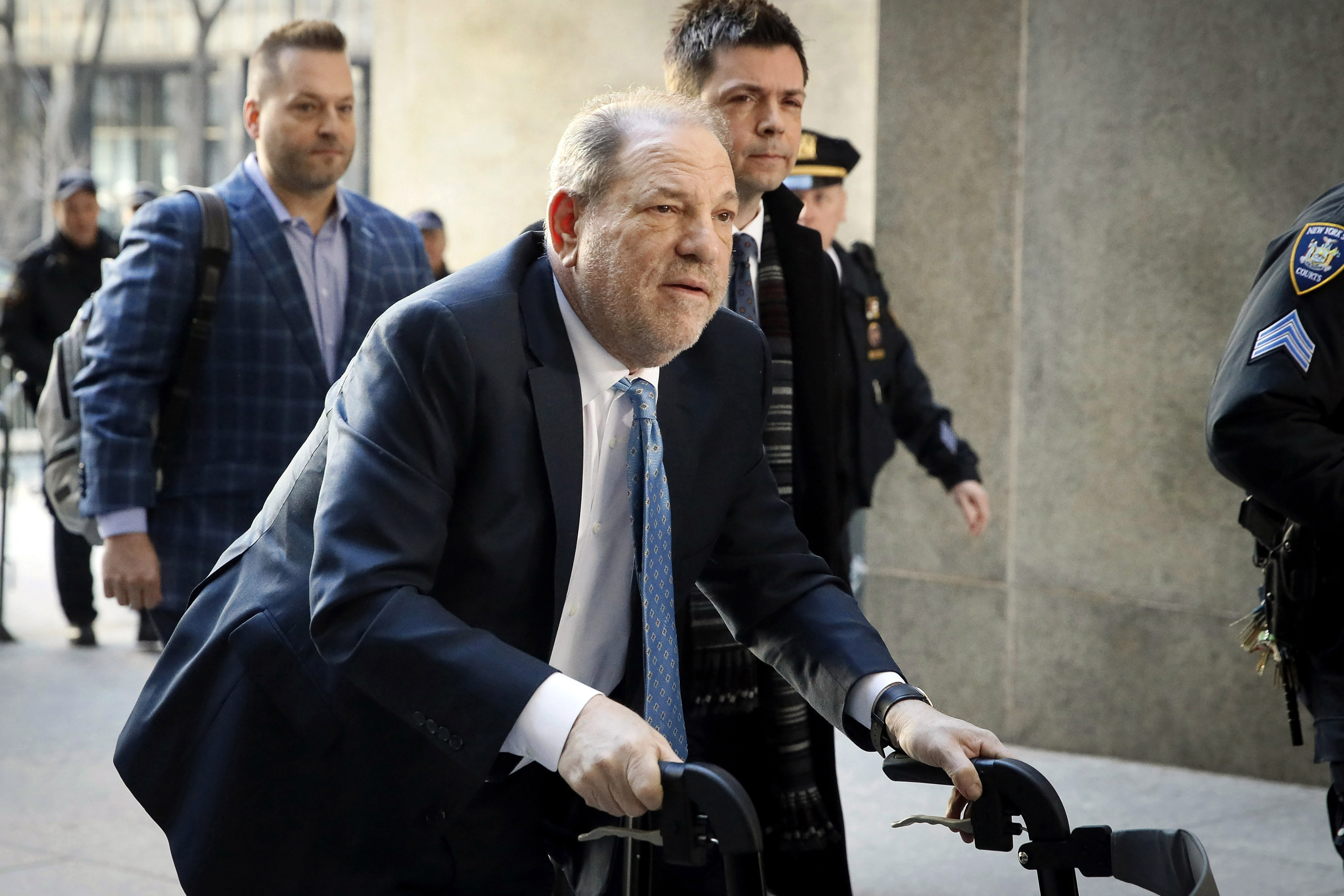 It’s expected to be followed by testimony from the first of the accusers, an Italian model and actor who says Weinstein raped her at her Los Angeles hotel in 2013.

Confusion arose in the courtroom, however, when Thompson during his opening statement made no mention of one accuser who had been set to testify as recently as last week.

Weinstein was indicted on 11 counts overall, but four of those counts – including two counts of rape and two of sexual assault – involved the woman who was not included in the opening.

A message to a district attorney’s spokesman on her status was not immediately returned.

Already a serving a 23-year-old sentence for a conviction in New York, the 70-year-old movie mogul now faces a trial in the city where he was once a colossus during Hollywood’s awards season. The four accusers who will testify in the case are expected to be identified only as Jane Doe. Jennifer Siebel Newsom, an actor and documentary filmmaker who is married to California Governer Gavin Newsom, is among the accusers. Siebel Newsom was the first accuser Thompson described in his opening, saying that though she appears to be in a powerful place now, at the time of her assault she was just like the other women Weinstein targeted.

“Seventeen years ago, when she met the defendant in 2005, she was a powerless actor trying to make her way in Hollywood,” Thompson said.

In an attempt to head off potential defense strategies, Thompson told jurors they would hear from a psychologist who will dispel rape myths. Key among them is the idea that a sexual assault victim would not have further contact with their assailant.

Many of the accusers had contact, and even initiated dealings, with Weinstein in the years that followed their assault. Siebel Newsom sent him emails. The masseuse worked for him again. Thompson said the jury will learn that’s not unusual under the circumstances.

Four other women will testify at trial that Weinstein sexually assaulted them, though their accusations did not lead to criminal charges. In his opening presentation and a possible hint to his trial strategy, Thompson paired each of them to one of the other four accusers based on the similarity of their stories.

The Associated Press does not normally name people who say they’ve been sexually abused unless they’ve agreed to be named publicly, as Siebel Newsom has through her attorney.

The trial opened two weeks ago with jury selection, five years after women’s stories about him gave massive momentum to the #MeToo movement.