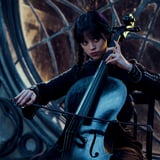 Netflix’s “Wednesday” is not the typical Latina representation we’re used to seeing. Assistant professor of Media Studies at the University of South Florida’s Department of Communication Dr. Diana Leon-Boys says we’ve become accustomed to the “can-do Latina” girl. From shows like “The Expanding Universe of Ashley Garcia” to Marvel’s “Runaways,” this Latina can do anything she sets her mind to thanks to her positive attitude. She’s a plucky go-getter, a pleaser, and if she faces any systemic barriers, they are not described and certainly not ascribed to sexism or racism.

“She can do it all and she can lift herself up by her bootstraps, which can become harmful and problematic,” Dr. Leon-Boys, who wrote “Elena, Princesa of the Periphery: Disney’s Flexible Latina Girl,” says of the can-do Latina archetype. She’s grateful to see this new type emerge in the last decade or so, crediting the more empowered approach to portraying Latina girls. But she’s still not satisfied, telling POPSUGAR, “It’s still very repetitive, it’s still very similar, it’s still very much part of this economic risk-averse strategy that media conglomerates use because they know it’s safe.”

Dr. Leon-Boys recounts an exercise she does with her students in which she asks them to name Latinx shows that don’t mention a quinceañera. “I have never gotten anyone to mention more than two,” she says. And usually, they’ve forgotten a detail like the quince flashback in “Jane the Virgin.” There is no quinceañera in Tim Burton’s “Wednesday.” And our protagonist, played by Mexican and Puerto Rican actress Jenna Ortega, would hate it anyway. She’s not one for poofy dresses or celebrating birthdays in general. Wednesday is much more interested in death. Dr. Leon-Boys sees this as a positive thing.

“I don’t want to say I’m a dark person, but I would align more with, I don’t want to say ‘pessimistic,’ but more realistic points of views and mentalities and thoughts and ideas and conversations about death. That I don’t think you really see a lot through the figure of a girl on television, particularly through a Latina girl,” she says.

Christina Aguilera’s Latinidad Was Just Right All Along

No one is going to call Wednesday “plucky,” and that’s a good thing. Dr. Sonia Alejandra Rodriguez, associate professor of English at LaGuardia Community College-CUNY, agrees. They say that the pleaser or can-do character sets up the story so the “moral lesson is you have to respect your parents. You have to respect whatever government is in there . . . And so, the people-pleaser characters are always the ones that are about the status quo.”

“There’s still a lot of hypersexualization of young Latinas and Latina women in 2022 in the media. That is still one of the stereotypes of Latinas.”

Dressed in all black and “allergic to color,” Wednesday breaks those molds in more ways than one. “There’s still a lot of hypersexualization of young Latinas and Latina women in 2022 in the media. That is still one of the stereotypes of Latinas,” says Dr. Rodriguez. But thankfully, Wednesday escapes that fate and doesn’t end up on the virgin/asexual side either. Instead, she finds herself at the point of a love triangle, in no way a sexual object, and literally buttoned up to her neck.

It’s refreshing to see a Latina with a different look. Wednesday is never seen in anything close to a bodycon dress or a short skirt. Instead, she’s the original goth, mostly in black and always with a gothic vibe. “I feel like we never see goth rocker Latinas on TV,” actress Michelle Ortiz recently told POPSUGAR about her punk character on the recently renewed “This Fool.” And it’s true, in real life, Latinas rock the whole range of styles and identities, but are still vastly underrepresented when it comes to our numbers in the population. And the roles we do get while expanding beyond the sexpot and the maid are still not expansive enough – making Wednesday’s goth girl a pleasant outlier.

Dr. Rodriguez has hope moving forward that we’re going to see a more varied representation of Latinas on screen, thanks to the progress she sees in young-adult literature. “[In YA] the representations of Latinas are so vast, thinking about all these different experiences that young Latinos [have] in the US. What I appreciate about the present representation is that there is no shaming,” they say. “You want to be shy and quiet and a family person? That’s great, do that – we’re rooting for you. You want to be a little bit more rebellious? You want to not be part of the traditional family dynamic? That’s great, too.”

“Wednesday” doesn’t shy away from exploring family dynamics even as it bucks other tropes of Latinx representation. “The mother-daughter relationship is a very big trope. How do you identify, like, how do you find your individuality and your personhood? It’s always in contrast to the parents. For Latinas, it’s always in contrast to the mom,” Dr. Rodriguez shares. And that’s what you see in “Wednesday,” as our heroine begins the series defining herself against her mother before coming to understand herself better.

Indeed, Wednesday exists within the confines of her famous family. This may be her story, where she goes off on an adventure of her own, but she’s firmly rooted in her Addams-ness, thanks to Thing’s companionship and cameos from the rest of her relatives. Dr. Rodriguez sees this dynamic a lot in Latinx literature. “How do you stay within your community and your family but also still learn about yourself by expanding and going outside? It’s this really big tension [and] there’s definitely no line on how to get it right. But [it] also feels like a very general young-adult experience.” For Latinx communities, the tension is heightened, because we’re also pressured to acculturate to the dominant US idealogy that puts individuals above families. Thankfully, as Dr. Rodriguez points out, “Latinx authors are like saying no, we need to tap into our culture, we need to tap into our traditions, we need to tap into our family, as like a form of success.”

“We want to be portrayed as vets, as bakers, as artists, as painters, as activists, as firefighters – everything. But when we only have, like, six, seven, or eight, as opposed to 90 plus [shows], they can’t do everything that we possibly want them to.”

That collectivism is certainly part of Wednesday’s story in the new show. She may be outside of her parent’s home, but she’s at their alma mater and, if anything, learning more about her family and their history. It’s a nice way to nod to Wednesday’s Latinidad without dipping into the overplayed elements that the media too often relies on. “We want to be portrayed as vets, as bakers, as artists, as painters, as activists, as firefighters – everything,” Dr. Leon-Boys says. “But when we only have, like, six, seven, or eight, as opposed to 90 plus [shows], they can’t do everything that we possibly want them to. So what I find is just like a thirst of historically excluded populations [for] more layers, more nuance, more depth.”

Hopefully, Netflix’s “Wednesday” with its anti-“can-do” protagonist helps to quench some of that thirst. It’s a glass of water in this metaphor, not a deep spring, but it’s something.