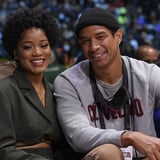 It’s not often that Keke Palmer shares her relationship with boyfriend Darius Jackson with the world, but she made an exception for his birthday. On Jan. 21, the “Nope” star shared a video on Instagram of the two of them driving around while Jenevieve’s 2021 song “Baby Powder” played on the radio. The actor is all smiles while the fitness YouTube star grins at the camera when he realizes Palmer is filming him.

“I can easily write long emotional posts for all my girls birthdays, but it’s so cringy writing a birthday post for you 🥴 because the love is so sacred,” Palmer wrote. “It almost feels asinine to try to share or give a glimpse into something that only we could understand. I can share most things so easily, but not you.”

Palmer and Jackson are expecting their first child together later this year. The 29-year-old shared the news in December 2022 when she hosted an episode of “Saturday Night Live.” “There’s some rumors going around, people have been in my comments saying, ‘Keke’s having a baby, Keke’s pregnant,’ and I wanna set the record straight – I am!” she said before pulling back her jacket to reveal her growing baby bump.

Since announcing her pregnancy, Palmer has continued to keep her relationship with Jackson out of the public eye. That makes her rare post in celebration of his birthday all the more special. Still, when the actor does talk about her relationship, it’s clear how strongly she feels about her partner.

During a 2021 interview on the “Tamron Hall Show,” Palmer shared why she decided to go Instagram official with Jackson in August of that year. “It became more difficult to hide,” she said of her relationship. “We spend all this time together, and he really is my closest friend, so it just becomes a thing where I’m not going to hide something that makes me happy.”